Do you believe that 275 species of snake are spread across Indian subcontinent and among it 50 species are venomous!
Majority of the population die due to snakebite every year. The most venomous snakes in India are Indian cobra, common krait, russells viper and saw-scaled viper.
We must keep in mind that snakes never bite unless they feel threatened. Sometimes we unknowingly stamp them or disturb their habitat which infuriates them.
The patient shouldn’t panic or sleep as it could trigger fast spreading of the venom. Tie a cloth tightly above the bitten spot so that the venom doesn’t spread to other body parts. Keep the venom below heart level.
Remove any jewellery as they could cut into swollen parts. Take the patient to nearby hospital where they will give antidote according to the snake species. It would be useful if the patient remembers the snake, in case they don’t remember it wouldn’t be a great deal as the doctors can identify the bite according to the symptoms.
Not all snakes that bite are poisonous. From the bite marks and swelling we can very easily identify it. Several teeth mark at the bitten spot and no swelling leaves us in safer zone. One or two teeth mark accompanied by swelling and change of color at the bitten spot is a sign that it is venomous. Polyvalent anti-venom serum is given as antidote for all of the four major snakes.

Now I will tell you about the four venomous snakes, their habitat, the severity of their venom, about their treatment and their survival duration.

Indian cobra is mostly found in open forest, fields and villages. In India it is considered sacred and prayed in the form of deity. The main symptoms of Indian cobra bite are drooping eyelids, vomiting, sweating and extreme salvation. The venom of Indian cobra can lead to respiratory failure, cardiac arrest and muscle paralysis. The bitten person can survive from 15 min to 2 hours after the bite.

Common krait is found in scrub jungles, fields and inhabited areas. Krait which is active during night feels threatened by human intrusion. It reacts vehemently and bites the intruder who feels minimal pain and swelling. Though krait is said to be lethal, with proper treatment the patient can be rescued from 4to 8 hours from the bite. In severe cases the patient will have labile hypertension and brain death.

Russell viper is spread across plains, coastal lowlands and hills. Viper bite infuses extreme pain and swelling. The patient will experience blood in gums and urine. Blood pressure and heart rate will drop significantly. Blistering will occur at bitten spot. Sometimes vomiting and facial swelling also occurs. If the bite is untreated the patient can die from kidney failures. They will survive from 1 to 14 days or even later. 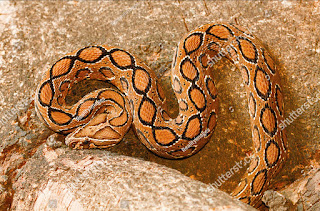 They inhabit scrublands, nook and crannies of the rock and they bury themselves under the sand. Their side winding movement makes them quick and unpredictable. Their bite could trigger symptoms like nose bleeding, blood vomiting and blood in urine. It also incorporates blood clots throughout the body called disseminated intravascular coagulation. Sometimes there can be kidney failures too. The patient can survive up to 30 minutes from the bite.

21 thoughts on “Venomous snakes and treatments”